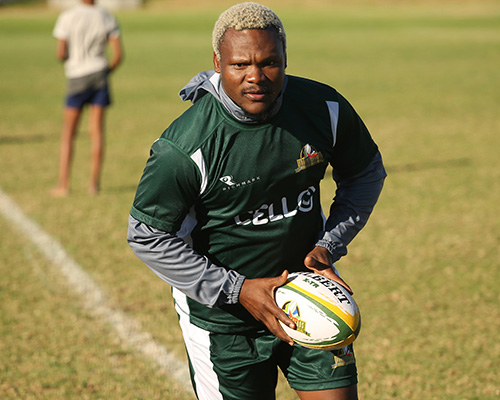 The SA RUGBY LEGENDS joined forces with the SWD Rugby Union to officially launch SARLA’s Vuka Rugby programme in the Mossel Bay region with a rugby clinic for all the participating teams from schools in the area.

Leading the clinic was legendary loose forward Kabamba Floors, who hung up his boots with the SWD Union in 2014, after an 11 year career that started where it ended and took him to over 207 first class appearances in Super Rugby (Cheetahs), Vodacom Cup and Currie Cup (Cheetahs and SWD) as well as a stellar career with the Springbok Sevens between 2003 – 2006, captaining the side in 2006; as well as a Springbok cap earned in 2006.

Kabamba was joined by one of his former coaches from the Cheetahs, Helgard Muller, as well as players from the SWD Eagles side and head coach Rynardt van As.

The session focused on the basics of the game with key drills to highlight the important skills. Kabamba was impressed with the raw talent he saw and spend a good hour fine tuning skills with these young players.

Joining forces with SWD, SARLA will run the Vuka programme in Mossel Bay and other areas of the greater SWD Eagles region over the current rugby season, with players also vying for those all important spots in the SWD Eagles team who will attend the 2017 Carfind.co.za Iqhawe tournament in Johannesburg later this year.