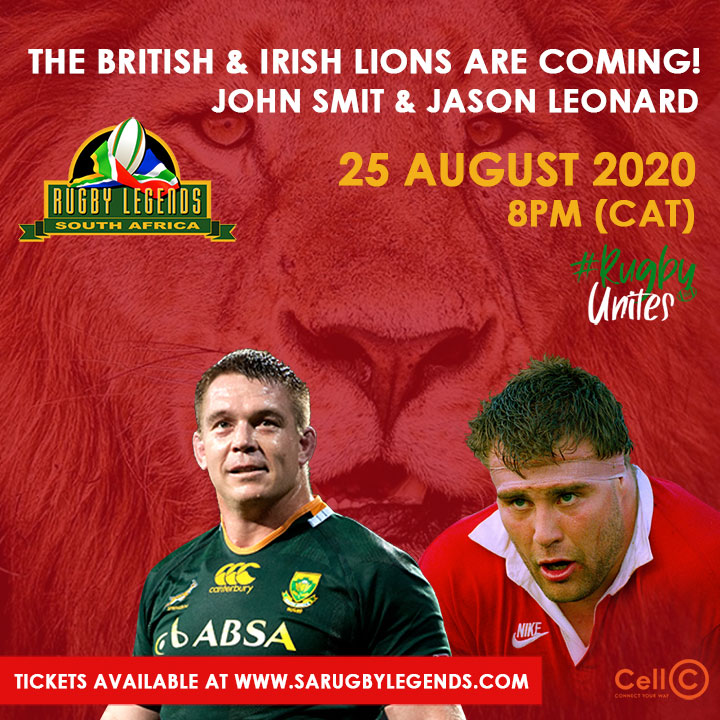 The South African Rugby Legends Association (SARLA) is hosting the second in its series of ongoing webinars in aid of the #RugbyUnites initiative. So far, #RugbyUnites has seen major rugby unions and former players, coaches and administrators shopping and packing essential food parcels for charity in several provinces.

The webinar series is both a new fundraising mechanism for this great cause, and a chance for the public to interact with their favourite Rugby Legends. Fans can get their tickets now to attend the webinar on Tuesday, 25 August at 8PM CAT.

Episode 2 is one that fans will not want to miss – particularly with the British and Irish Lions tour coming up in 2021. Taking their places on the couch in Episode 2 are two ex-players who both had illustrious international careers – South African Rugby World Cup Winning Captain John Smit and England’s most capped International player, Jason Leonard (OBE).

John Smit was the second Springbok to play 100 tests, eventually going on to play for his country 111 times, captaining them on 83 occasions and unforgettably leading South Africa to Rugby World Cup Glory in 2007. He also captained the team through one of the most successful times in Springbok Rugby history in 2009, when the Springboks won both the British and Irish Lions and Tri Nations series.

Those who buy their tickets for the webinar will have the added privilege of being able to ask questions via email, which will be answered by John and Jason during their on-air discussion. And all proceeds from ticket sales will be donated to the #RugbyUnites initiative, which is feeding hungry families throughout South Africa who have been affected by the COVID-19 pandemic.

SARLA CEO Stefan Terblanche says, “This episode is going to be hugely exciting. We’re hearing from one of the three legendary South African Rugby World Cup winning captains who made history, and England’s most capped player and of course a Rugby World Cup winner himself. Both John and Jason played alongside some of the greats and have incredible insight to share about the proud history of the game. There is a lot to talk about with the upcoming British and Irish Lions tour on the horizon, and plenty to cover as far as the future of this great game is concerned.”

John Smit says, “It’s an honour to be included as a guest on the #RugbyUnites webinar series, and I hope fans will come on board to support this great cause. We will be sharing a lot of unique and interesting stories about our time playing rugby. Jason and I go way back and have plenty of tales to tell. The Lions tour takes 12 years to get here, and the anticipation is beginning to build – especially as we have all been starved for international sport for so long. Get your tickets and tune in, it’s going to be a jam-packed hour on the couch.”

Virtual tickets are available at a cost of R 100. Alternatively, pay R 150 and get an entry into the Grand Prize Draw for a Springbok Opus Book. Register and buy your tickets online at www.sarugbylegends.com. Ticket holders can email their questions for John and Jason to info@sarugbylegends.com, using the subject line #RugbyUnites Webinar.

To stay up to date with news about SARLA’s continued efforts to support local communities, follow the SA Rugby Legends on Facebook .